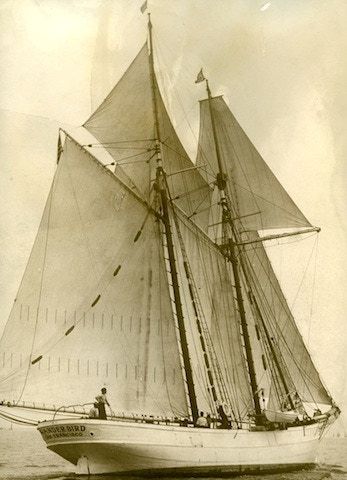 Warwick attended the University of California, Berkeley, but formal schooling was not for him and money was short. He dropped out during his sophomore year and would go on to be a highly self-educated man. He joined the United States Navy, but Navy life did not appeal to him any more than college. However, the sea and sailing did, so he tried the Merchant Marine next. But he found that life unendurably dull and departed his final passage in northeastern Australia.

He responded to a newspaper clipping and found work, first on an old yawl and then as master of an ex-yacht. Remembering that time in his book Fifty South to Fifty South, Warwick wrote:

My schooling in sea lore started when I joined a miserable fifty-five-foot yawl, the Eleanor, in the steaming port of Davao, a jungle-hedged village on the island of Mindanao in the Philippines. Previous years in the war-time Navy and months in the merchant marine can be almost entirely discounted. What one can learn of the real ocean – my ocean – in those services is little indeed. The Eleanor proved a hard school. She was a sea-going monstrosity whose general unfitness for the sea was exceeded in quality only by the lamentable dilapidation of such scanty gear as she had. Fortunately, I for long did not suspect just how frowsy she was, my first ship. In her I voyaged perilously for just one year. Ardently I pursued self-taught mastery of navigation. Of necessity I learned to splice parted hemp and wire, how to patch sails so rotten that a sneeze, almost literally, split them. By dint of eternal patching and a truly tropical disregard of time’s flight we worked Eleanor from the Philippines to Jolo, Borneo, Celebes, Bali, Lombok, Timor, Thursday Island (filthy spot!) and on to Port Moresby, capital of British New Guinea. In New Guinea, he was offered work on a much superior vessel, the Sir Arthur, whose owners were engaged in the somewhat questionable business of labor recruiting. This activity is the modern equivalent of slaving, although there is no rough stuff connected with it, a more subtle and effective technique having been found to lure jungle men to labor in mines and plantations. I was offered command of the schooner and jumped to take it. At twenty-three I had my first vessel…. My job was to keep an eye on the ship and her cargo, to get her safely in and out of rivers, across the bars where South Pacific rollers broke in majestic thunder, and then on across the debris-strewn Gulf. It was a lonely, interesting job. It left me with a horror of jungles and an intense dislike of auxiliary power. Despite the appeal of having his own command,Warwick could not bring himself to continue “blackbirding,” as this form of slaving was called. His travels had taken him to the Philippines and China, where he had seen first hand U.S. and European imperialism in those countries. And by this time, he had mastered celestial navigation and the sea had not lost its allure.

Where to run now? Where find anodyne for the continuing sea fever? Perforce I turned to yachting and naturally enough to the more rugged and interesting sort of yachting, ocean racing. There were berths waiting for a man who could navigate and command even though he had no money or social position. (FStFS, p. 16) In 1925, Warwick returned to the United States’ eastern seaboard, still searching for his true calling. By this time, he had conceived the plan of writing for a living, beginning with articles for a hometown newspaper and, ultimately, a number of submissions to the Paris Herald.