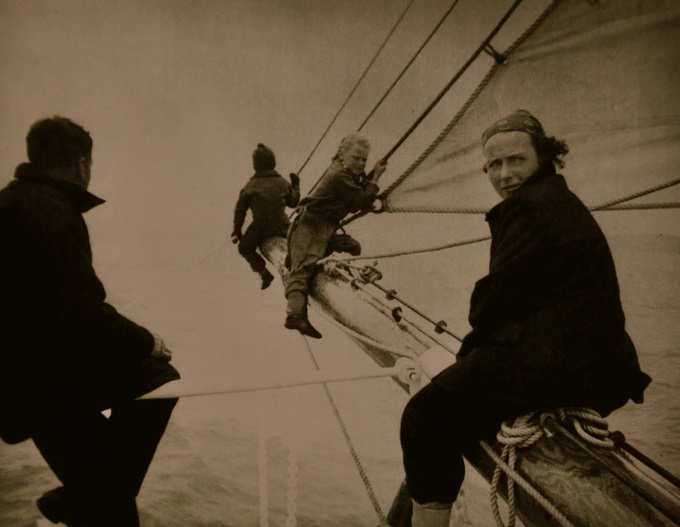 After only a few months of marriage, they were actively searching for a sailing ship.

Warwick would later write: In 1928, I was married and my sailing curtailed, not because of my wife, oh, no! It was high time, we two decided, for me to stop sailing boats for other people and to get one for us…. We were poverty poor in everything except enthusiasm and determination. How we pinched the sous in our seventh heaven Paris garret, hoarding the few francs to be salvaged from a newspaperman’s meager salary, how our dream ship to shape slowly from adventure stories churned out by night for pulp magazines, this is again another story. By this time I knew I wanted a boat built for and tested in arduous pilot service. I wanted a ship which could go to sea and keep the sea in comfort and safety regardless of the season, a ship smart in sailing and easily handled, a vessel which could run forever with a fair wind and lie snugly and quietly hove-to with a gale ahead.

We soon started seriously trying to find a suitable ship. After a few months of placing and responding to ads and traveling to look at various vessels, Warwick heard about an 85-foot ship advertised as being out of the water in dry-dock in Hamburg, Germany, having many bunks, of sound build, and currently for sale.

Before heading to Hamburg, they met with an ex-classmate of Warwick’s who had evolved a program for which he advertised personally guided tours of European towns and architecture; he, of course, being the guide. He boasted, “All I have to do is familiarize myself the night before with the buildings or place in question, then, on tour, I can appear very knowing!” The participants in the tour paid enough so that their guide had the expenses covered, with a little left over. The young couple quickly realized that a similar scheme could work for them on a sailing vessel…..

In Hamburg, they found the neglected schooner. She had been first christened Elbe 5, the fifth in a series of twelve pilot ships designed to guide other ships along the Elbe River between the rough North Sea and the German port at Hamburg…..

Engineless pilot schooners had been replaced by motorized vessels in 1924 and Elbe 5 sat in port, deteriorating, for five years before being discovered by Warwick and Gwen.At 85 feet with two masts and vastly larger than they had been imagining, she was to become the vessel of their dreams. She carried the name Vandervogel on her transom, having been used by a youth group (similar to our group Outward Bound) of that name before World War I. The name she bore, anglicized into Wander Bird, was an entirely satisfactory name; she carried it proudly across vast bodies of water subsequent to her purchase in 1929 until World War II. Savings and the rewards of writing for a newspaper were insufficient for the purchase and making her ready for sea. Warwick, in this ebullient time before the crash of 1929, borrowed funds to complete the work…..

Some of the work was performed by professionals, but Warwick and Gwen did a great deal of the restoration. Although the vessel was “sound,” meaning no or little structural work was required, virtually every detail required attention, above and below deck. The interior of the schooner was paneled in the fashion of many northern European homes and boats. Over the years, the paneling had received many heavy coats of paint. Gwen and Warwick painstakingly removed all those layers, revealing a lustrous warm wood which lent the interior a wonderful cozy feeling. Similarly, linoleum was removed from the great cabin table, unique in that it was gimballed to remain horizontal when the vessel was sailing at an angle. A gorgeous Philippine hardwood was revealed, which contributed much the interior. The old pilot berths, four uppers and lowers on each side, were fitted with woolen curtains. The cabin floor and the benches running the length of the cabin were finished in linseed oil and wax. Through love and hard work, what had been a rather institutional interior was transformed into a warm and welcoming living space.