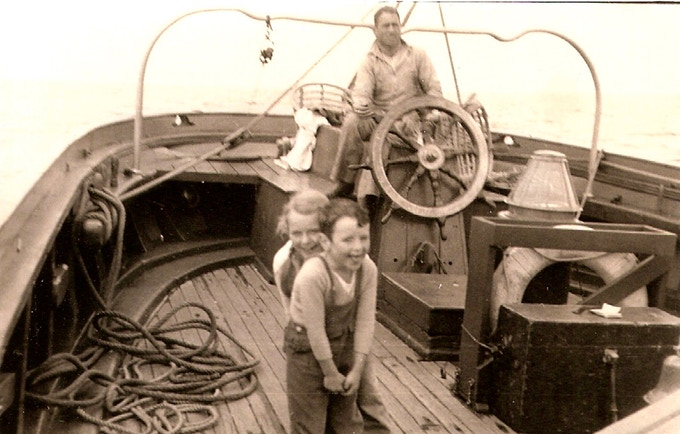 I grew up with the idea that “every sailor loves a good yarn.” I’ve always felt that I have led an unusual life; a life unusual enough to be of interest to the many friends who have said, “You should write a book.” And I believe that story is a “good yarn” and different enough to interest those who are not yet friends. Though I waited a bit too long, with help, I am finally writing that book.

I come at life from a more slant perspective than most. I learned to walk on the swaying deck of the Wander Bird, my parents’ schooner. My bed was a bunk on a rolling ocean. My orientation to the earth itself was unlike that of most children. I learned to “navigate” that deck instead of solid ground. Now that I have Parkinson’s Disease, the ground again feels unstable and I continue to traverse it as best I can, aided by the knowledge that I’ve done this before.

Until I was eleven years old, I lived part of each year at sea and that gave me a point of view that was already different. I was exposed to a variety of cultures. I experienced the forces of nature, which could be both dangerous and beautiful. I viewed firsthand the authority of the skipper of the schooner (my father) and came to respect the role of leadership, when well and honestly done. I believe this led me to have no fear of change, a fear so common in so many, and that has been the overriding quality of my life.

I have been a teacher, educated as a social worker, and chose to pursue improving social conditions in which people live, otherwise often considered politics. The desire to facilitate that improvement began well before my time in the People’s Republic of China during the Great Proletarian Cultural Revolution…..

As someone who has seen the future from living in the Cultural Revolution and Mao’s vision, I want to share the hope it gives and the method it offers. In this time of growing crisis in the United States and the world, I am trying to ameliorate the influence of the “American” ruling class and to help people in this country have a view that they might not otherwise hear or experience.

From birth to death is sort of like throwing a stone in a pond, where the ripples go out and get bigger and bigger. In that simple way, every individual starts out in life with their own personal interests first, but ideally ripples out and gets to know and care about more and more people. Exposed to more ideas, cultures and knowledge, each of us can develop conceptually more complex political thought. The world can be made better for this.

It is my wish that the production of the book rewards many volunteers, who have donated many hours of research, and that it conveys ideas that may help others to take action…..

And it all began on a rolling deck upon an ocean, both rough and calm by turns, always changing and always inspiring.